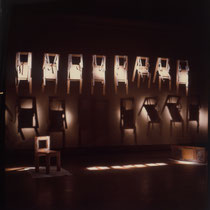 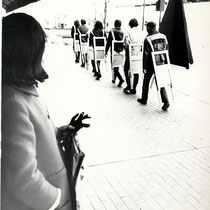 Gianni Pettena is a major figure of radical Italian architecture of the 1960s and 70s. An artist, architect, designer, professor, critic and historian of architecture, he defines himself first and foremost as an “an-architect”. He has contributed to redefining the discipline of architecture, characterising his approach through his use of artistic processes such as performance and installation. The performance Wearable Chairs consists in an urban procession of a group of young people, each wearing a folding chair strapped to their backs. Walking in single file through the city, the group stops periodically to discuss their future as a group. This performance was first activated in Minneapolis in 1971 by the students of the Minneapolis College of Art and Design. The version presented during FIAC is performed by the students of the Ecole Nationale d’Architecture de Versailles.