The project is an example of that “just-mental” architecture that Gianni Pettena described in the catalogue of the Festival S-Space (Florence, 1971). The drawing traces an intervention in three successive phases in a context modified by the work of human beings and then reconquered by nature, a small lake that had formed at the bottom of an abandoned quarry. A camera, placed on the upper edge of the quarry, provides an imaginary documentation of the phases. The idea of painting part of the vertical wall of the quarry pink and waiting for rain in order to observe the paint being washed away, the formation of a large patch of color on the surface of the water, is at bottom an attempt to visualize the work physically, to delicately introduce the human hand into a natural context: “It is the hope that nature, following its rhythms and its laws, will reclaim its territory, and that the human hand will therefore be ‘re-naturalized’ naturally” (G.P.). 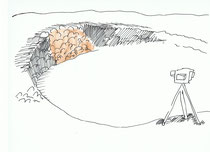 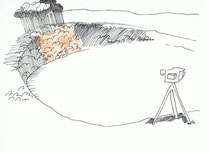 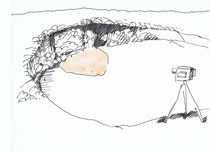